My Patreons have decided, here comes the post about my Catherine of Alexandria!

In Fraternis Militia Carnis we some times hold a carnevale. A medieval feast with medieval dress out. It is fun with games and as usual with Carnis there was a lot of good food. 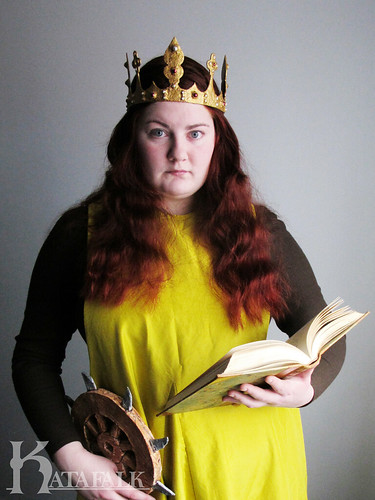 My first year as a trial member of Carnis was 2016 and that year we held a Carnevale at our annual meeting. It was a bit hard to come up with an outfit that fitted, what did they dress up like in the 14th century. In the 16th century there are a lot of pictures but for 14th, not so much. So I decided to dress up like a Saint. To be specific; Catherine of Alexandria. There are some photos on Carnis blog of me and some of the other members, an amazing deer for example! Click Here to go to it.

If was mostly because my name is Cathrin and there would not be that much work in fixing a costume but also because she was a very popular saint during the medieval era. She is often depicted dressed very finely with gold and a crown as she was a princess. As she was unmarried when she died she is often shown with loose long hair.
Her attribute is the breaking wheel that she was condemn to die by but did not. She also often wears a martyrs palm or the sword that was used for her actual execution 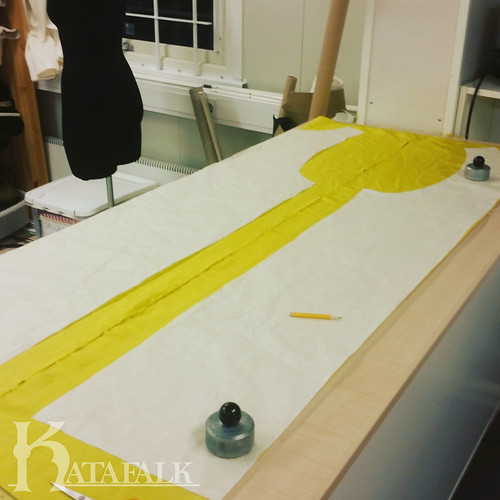 So I needed a fancy overdress, so I choose to make a silk side-less surcoat in yellow as I would probably get use of that later on. I lined it with a thin wool to make it fall nicely. I have blogged about the side less silk surcoat before. Check it out  Here ! It comes with a pattern. 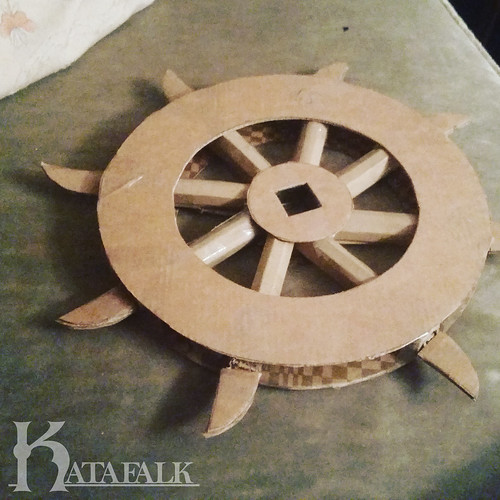 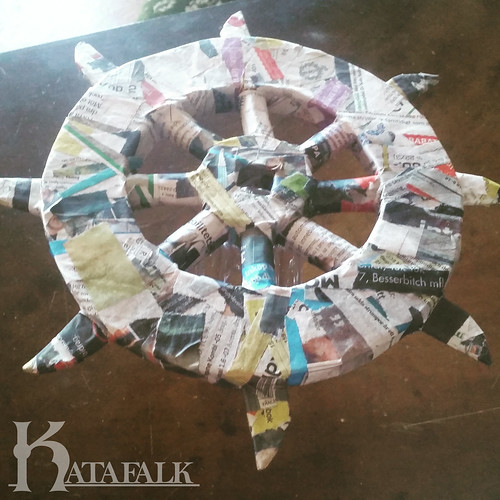 Then I needed a breaking wheel. It is often shown as a very big wheel, but I decided to make it smaller and also as it was “only” for dress up I made it out of an old cardboard box that I covered in newspaper and glue and then painted to look like wood. Small, light and portable! 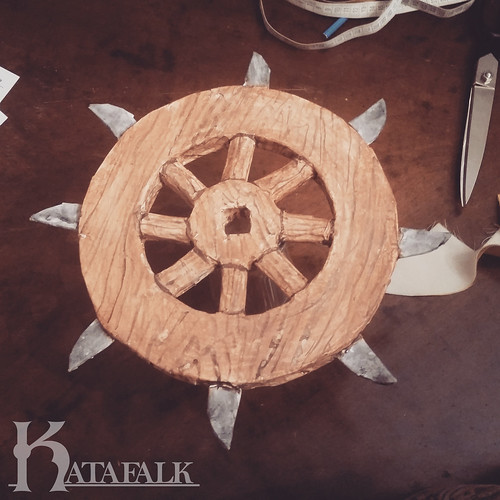 On to the crown. Here I was at a loss. How to make a medieval looking crown, but not spend tons of money on it but not having it look like a paper crown that you had as a child.
Then it hit me, as I kid in Sweden I played a lot with salt dough. it is cheap as it is only salt flour and water. It air dries and if fairly easy to work with. 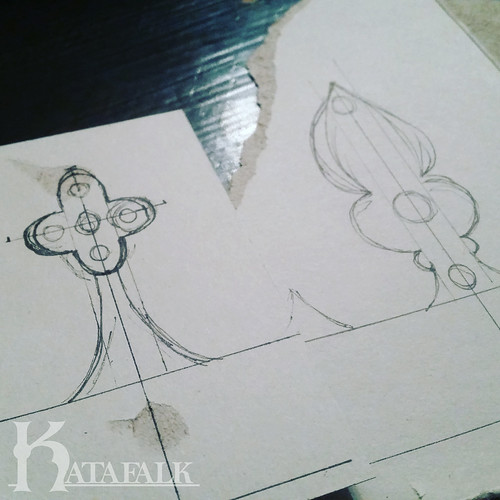 I started out with cutting a base of thick cardboard and based the shape on several medieval crowns. Then I glued beads onto the cardboard, as a crown needs gems. 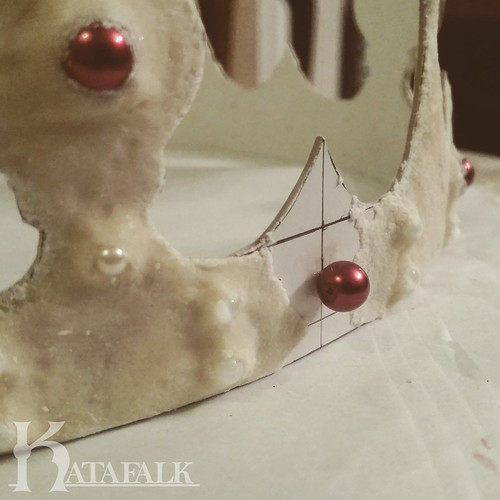 Then I covered it all in salt dough. It shrinks a bit when it dried so I had to touch it up a bit but it worked fine. 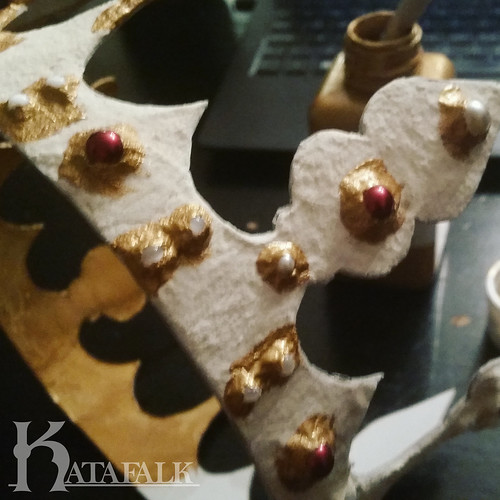 Then it was all covered in golden paint. 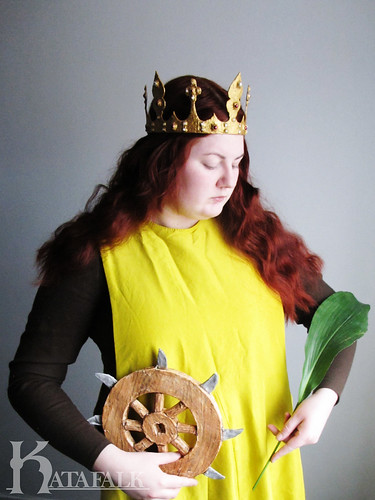 I did my best with the “martyrs palm” I got the only big enough green leaf at my local flower shop, some times you can not get it all. 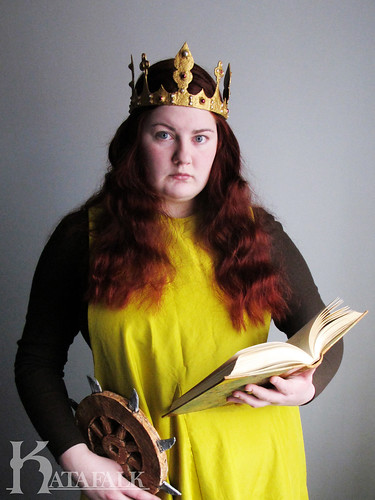 You cant go wrong, posing with a book as a saint ;)

In about a month we have a new carnival coming up and I have yet to decide what to do, but I have several ideas on things that might be good. You will of course see it as well, in the end.

So a new year is here! 2018!
And I have big plans for this year regarding Katafalk.
Late 2017 I took the step making Katafalk into a “real company”.
So I am going to open up my Etsy again and make it more active. I have also decided to start up a Pateron page. This will not affect my blog at all in a negative way, but I hope that it will make me post more regularly on Worpress.
All my content on my blog is free, and will always be free. I will not be making Patreon only tutorials, but there will be some perks for those of you who joins me over there as well.

Many of you might not be familiar with Patreon.
It is a subscription service that helps Creators to create more or better content by the help of its followers.
It is crowdfunding like Kickstarter or Indiegogo, but in stead of one big project it is focused on the continuous creative process.
Either by a monthly fee or a fee per smaller project. These fees differs from creator to creator and there are often a few different levels that you can choose from, each level having it’s own reward of some kind.

So if you like what I do, pop over at my Patreon and check it out. Perhaps you want to join or it might not be you thing at all. Just know that the blog will not be affected in a negative way at all by this, it will if anything be more active and regular than ever with the help of this.

Check out Katafalk on Patreon!